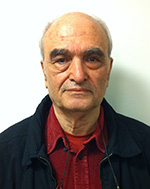 Moshé Machover was born in 1936 in Tel-Aviv, Palestine. As a teenager he joined the left-Zionist youth movement Hashomer Hatza‘ir, from which he was expelled in 1952 for questioning its ideology. As a student, he joined the Israeli Communist Party, from which he was expelled in 1962 together with a small group of party dissidents who challenged the ICP’s lack of internal democracy and its subservience to the Soviet Union.

Moshé Machover is a mathematician. He taught at the Hebrew University of Jerusalem, the university of Bristol, and at King’s College, London; he is emeritus professor at London University, and has been living in London since late 1968.

Apart from academic books and papers on mathematical logic and social choice (the mathematical theory of collective decision-making), he has written extensively on socialist theory, particularly as applied to Israel, the Middle East and the Israeli–Palestinian conflict.

With Akiva Orr he co-authored Peace, Peace where there is no Peace (1961) on the Israeli–Palestinian conflict (Hebrew; English translation available online) With Emmanuel Farjoun he co-authored Laws of Chaos: A Probabilistic Approach to Political Economy (Verso, 1983), a critical reconstruction of Marxian political economy using a stochastic approach borrowed from statistical mechanics. A collection of his essays, Israelis and Palestinians; Conflict and Resolution was published by Haymarket Books in 2012.