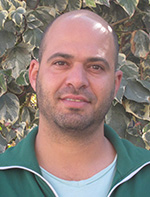 Itamar Shappira is Israeli, 33 years of age and lives in (West) Jerusalem. He is a former IDF soldier. Itamar is the Israeli protagonist of the film Moving Beyond Violence.

As an activist, Itamar co-founded and worked with ‘Combatants for Peace’ from 2005 to 2008. He was its Israeli coordinator for a year. He also represented the organisation ‘Breaking the Silence’ abroad, in a number of European countries. Drawing from his own experience of participation in the military and from hundreds of testimonies given by other soldiers, he gave talks about the practices of control and terror of the Israeli Army in the Occupied Palestinian Territories.

He works as a tour guide, specialising in Jerusalem, focusing on cultural-religious-ethnic tension and collaboration, narratives of religion and politics and collective identities, both in history and in the present. He works both privately and through a unique Israeli-Palestinian alternative tourism company. In the past he worked for over three years at Yad Vashem, the Holocaust Memorial in Jerusalem until he was fired for ‘mixing the Holocaust with politics’ (god forbid...) and today gives alternative Holocaust-remembrance tours at Yad Vashem (privately of course).

He puts his time and energy in a number of different activities: he plays flamenco guitar, performing with Flamenco singers, dancers, and percussionists, and occasionally collaborates with musicians from different traditions, including Arabic, Indian and jazz.

Today he is an independent activist, not attached to any particular NGO and he continues to look for a better way to contribute.