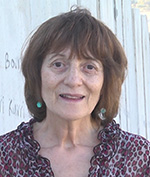 Irris Singer is a feminist psychotherapist working within an Attachment and Relational orientation in the interface between psychoanalysis and politics. A training therapist, supervisor, teacher, feminist and human rights activist, Irris Singer lives between Israel and London. She has worked professionally in both countries, co-founding the feminist Counselling Centre for Women Israel, and as acting Clinical Director at the Institute for Psychoanalysis and Social Studies UK.

Irris’s particular interest is in difference and how that gets played out between individuals and groups. Irris draws on her own experience of difference between her immigrant Jewish family’s heritage and the English communities where they lived. Early on she realised that her difference could provoke either hostility or idealisation even at school. Later she experienced a similar dynamic between class and people’s colour in the UK, and later still in Israel between Jews of different ethnicities, colour and class, and more acutely between Jews and Arabs.

Irris struggled to understand what was behind those responses. With the help of students and participants in her experiential workshops on difference, Irris has come to understand the internal process of projections and introjections that either dehumanise or idealise. Irris and the Moving Beyond Violence team have focused on the protagonists’ reversal of that process as they withdraw their projections and step out of denial of collective dehumanising narratives and behaviours.

Irris and the team (check us out) look forward to your contribution on the movingbeyondviolence.org website. We hope that together we can find ways to contribute in our work settings and communities to reduce the cycle of fear and violence that so often accompanies difference.