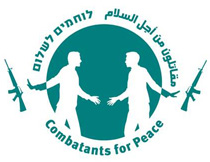 Combatants for Peace is a partner organisation to Moving Beyond Violence. The Combatants for Peace movement was started jointly by Palestinians and Israelis, who have taken an active part in the cycle of violence; Israelis as soldiers in the Israeli army (IDF) and Palestinians as part of the violent struggle for Palestinian freedom. After brandishing weapons for so many years, and having seen one another only through weapon sights, they have decided to put down their guns, and to fight for peace. Statement of beliefs “Combatants for Peace believe that only by joining forces, will we be able to end the cycle of violence, the bloodshed and the occupation and oppression of the Palestinian people. We no longer believe that it is possible to resolve the conflict between the two peoples through violent means; therefore we declare that we refuse to take part any more in the mutual bloodletting. We will act only by non-violent means so that each side will come to understand the national aspirations of the other side. We see dialogue and reconciliation as the only way to act in order to terminate the Israeli occupation, to halt the settlement project and to establish a Palestinian state with its capital in East Jerusalem, alongside the State of Israel.”