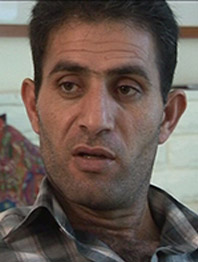 Bassam Aramin became involved in the Palestinian struggle as a boy growing up in the ancient city of Hebron. At 17, he was caught planning an attack on Israeli troops, and spent seven years in prison. In 2005, he co-founded Combatants for Peace, an organisation of former Israeli and Palestinian combatants leading a non-violent struggle against the occupation. Since then, Bassam has never picked up a weapon – not even when, two years later, his ten-year-old daughter Abir was gunned down and killed.

At the age of 12 Bassam joined a demonstration where a boy was shot by a soldier. “I watched him die in front of me. From that moment I developed a deep need for revenge and became part of a group whose mission was to get rid of the catastrophe that had come to our village. We called ourselves freedom fighters. At first we raised the Palestinian flag over electric cables and in trees; then we threw stones and empty bottles, later we found Jordanian abandoned hand grenades and decided to hurl them at Israeli jeeps -two of them exploded.  No one was hurt. In 1985, at the age of 17, I  received a seven-year prison sentence.”

On October 1, 1987, in an Israeli prison 120 prisoners – all teenage boys – were beat, naked, until they could hardly stand. Bassam was held the longest and beaten the hardest. The incident with the soldiers made Bassam realize the importance of preserving humanity – the right to laugh and the right to cry. About this time Bassam began conversations with a prison guard who had tried to protect him.  It was the start of a dialogue and a friendship. “He thought Palestinians were the settlers and didn’t understand our fight.  I carefully prepared for our talks and told him our story. We discovered many similarities and some months later the guard said he understood now that the Palestinians were not the settlers and that he understood our cause.” Seeing how this transformation happened just through talking made Bassam realize that the only way to resolve the conflict was through dialogue, not violence.

Bassam was released in 1992 just before the Oslo Accords, and there was a great feeling of hope for a two-state solution. It wasn’t until 2005 that some Palestinians ex-combatants and Israelis former soldiers, who had all come to believe in non-violence started meeting in secret. They met as true enemies who wanted to speak. The Israelis were refusing to fight, not for the sake of the Palestinian people, but for the sake of the morals of their society. The Palestinians, too were not acting to save Israeli lives, but to prevent Palestinian society from suffering more. It was only later that both sides came to feel a responsibility for each other’s people.

On January 16, 2007, Bassam's 10-year-old daughter, Abir, was shot and killed in cold blood by an Israeli soldier while standing outside her school with some classmates. The children hadn’t even been throwing stones. Bassam is the co-founder of the Palestinian-Israeli movement Combatants for Peace and since Abir’s death has been an active member of the Bereaved Parents Circle. Why Bassam continues is his efforts to move others beyond violence is best described in his own words:

“ Abir’s murder could easily have led me down the path of hatred and vengeance, but I felt compelled to return to dialogue and non-violence. After all, it was one Israeli soldier who shot my daughter, but it was one hundred former Israeli soldiers, Combatants for Peace, who built  a garden in her name at the school where she was murdered.”